The beaches of the region are famous and organized, with wonderful clean water, which for another year (2008) is awarded with the Blue Flag.

The tourist infrastructure of the region is high, with many choices of accommodation and entertainment.

You will find many accommodations of all types and all categories, shops, entertainment and restaurants. Whatever your preferences are, you will definitely be satisfied with the wide variety of choices in the area.

Luxury hotels, large units, small family businesses, accommodation for calm, accommodation in central locations near the sea, high standard rooms, cheap accommodation, camping on the sea, are completing the puzzle of a pleasant and enjoyable stay.

The friends of sea sports, the fanatic walkers, the followers of tradition and culture, the believers of fun, the nature lovers, the lovers of sea ride by boats and fishing ships but also those who love the traditional food, will find here the appropriate destination.

Toroni
This small village, with its glorious history, gave its name to Toroneos Bay and played an important role in Greek history.

Today, the village is a small settlement extended along the beautiful beach.

According to mythology, Toroni was the wife of the sea demon Proteus the son of Neptune, and mother of two children Polygonas and Tilegonas who challenged Hercules to wrestle with them, τwhen the hero returned from the country of the Amazons. Hercules, of course, defeated and killed them.

The city was colonized by Chalcis at the end of the 8th BC century. In 480 BC was forced to help Xerxes in his campaign against the South Greece. Then Midikas joined the First Athenian Alliance. Defected in 424 BC and joined Brasidas, the Spartan general, but throughout the course of the Peloponnesian War was the apple of discord between the Athenians and Spartans, and that is because Thucydides mentions it often.

In 348 BC it was conquered by Philip II of Macedonia. In 168 BC, after the battle of Pydna and the dissolution of Macedonian kingdom, the Romans invaded it. The ancient city was one of the largest and richest cities of Chalkidiki

During the first Byzantine period, the city was declined. The 14th AD century, the whole area was already a part of the monasteries of Agion Oros.

In the classical period, the city had two citadels, one to the south, near the highest part of it, and another in Lykithos, the small fortified peninsula near the port. Lykithos was fortified and the Roman and the Byzantine times.

The fortifications of the city - towers and walls of a certain height - were survived in a good condition by the end of the last century when the material was used as blocks to clad the streets of Istanbul and Thessaloniki. Today, only a few traces of their foundations are visible.

Sightseeing - Archaeological Sites:
The Early Christian church of St. Athanasios. It was built in the 5th AD century and it is an aisled basilica. It destroyed by a fire in the 6th AD century and another church was built on its traces, which also destroyed. Today, the mosaic of the middle aisle is preserved in a good condition.

Tristinika
A picturesque village of Municipality of Toroni, near the sea with fine sandy beach. It was built in the 14th century. The tradition says that a river was crossing it to provide the amount of water the workshop needed to work to process wool garments.

Tristinika is a diminutive and means small well.

By others, the meaning of the word refers to a battle where the invaders were three times more from the people that had to kill three enemies each to win (tris and nika, in Greek tris=three, nika=win).

Porto Koufo
The sight of the harbor from above is unique, as huge rocks rising above a bay, which looks incredible on the lake, since the very small opening to the sea is barely visible.

The cape behind the rocks of the bay was named in antiquity as Derris. Porto Koufo was the ancient port of Toroneos, a safe anchorage for the Toronian ships.

The port has up to now its ancient name, since by then called Koyfo port, in Greek Koyfo is the deaf, because the ancients claimed that whoever was in the bay could not heard all the noise of the sea. This port was even used as a metaphor for anyone who did not hear well, said to be "kofoteros the deaf (Toroneos) port". (More deaf of any who is deaf).

Porto Koufos is the safest and most natural harbour in Northern Greece and is almost always filled with all kinds of vessels.
Today is a quiet little village of fishermen that smells fresh fish. 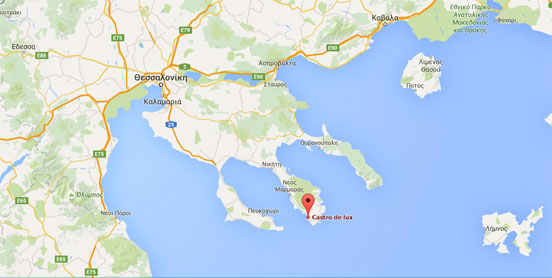